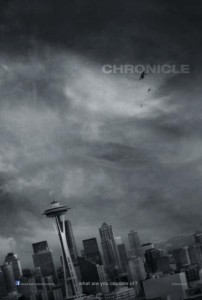 That was short eh? Here is the story: three teens, all with various issue of their own, discover an alien device which gives them telekinetic powers. I’m not going to go in to too much detail here since I don’t want to spoil it for you, but I have to say that its incredibly real. Also, it’s completely built in the found footage style of Blair Witch Project – they cleverly always explain how the found footage is captured – also a very interesting statement on how pervasive video capture has become. Almost any device can now capture video, and any and all devices which capture video are used here.

I have a few issues with the story later on, but it mostly rings true – and definitely leaves you wanting a sequel, which after you watch the ending, you’ll be trying to figure out.

[…] more at Movie Review: Chronicle | Helpful Hints For Living. This entry was posted in movies. Bookmark the permalink. ← The Swap-O-Matic, Vending […]