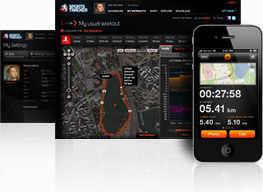 We use FitBit in order to track our progress, but one of the things that FitBit does not do is track activity other than steps and floor climbs – in fact the next version of the FitBit tracker, the Flex, won’t even be able to track stairs, due to its wristband form factor. Having just bought a couple of new bikes in February, we wanted to track the number of calories burned by cycling into FitBit as well.

We are currently using the FitBit android app on our Galaxy S3s in order to view and track things, and have already purchased an Aria scale from them (review of the FitBit Aria coming soon) so we’ve bought into the FitBit thing. Unfortunately, the app doesn’t track calories or distance automatically either.

So we went on the lookout for tracking software. What we wanted was something that we could fire up before we starting biking, it would speed, time, calories burned, and then be able to log that. We tried Noom, which worked fine for a while, but had a lot of duplicate features to the FitBit App. Plus it was huge, taking up a lot of space on the phone. noom is a great app, and I would recommend it if you have no other trackers like FitBit or Jawbone Up.

Enter Sports Tracker. This app does exactly what we need it to do – you fire it up before you get on your bike, it will auto pause when you stop, and restart when you start moving again. When you are done it will record your workout. Unfortunately, there is currently no automated way to sync that data with FitBit, but its trivial from that point to just enter the calories burned into your FitBit app.,

So if you are looking for good, bare bones sports tracking software, Sports Tracker is highly recommended.