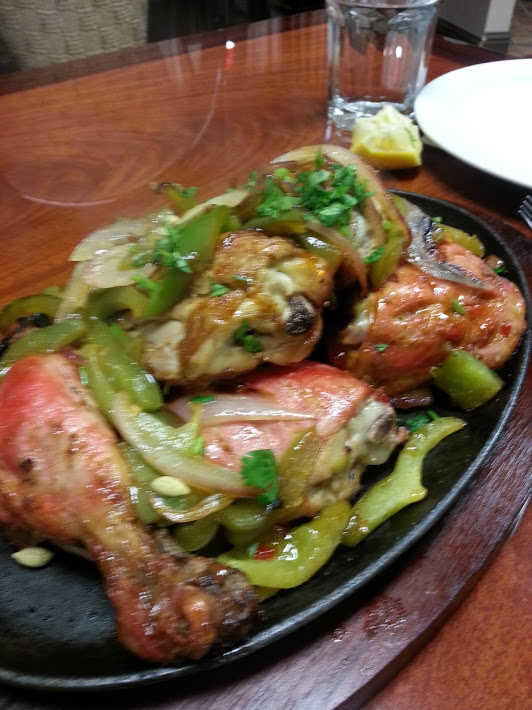 We LOVE Indian food but it usually ain’t paleo! Although you can find some restaurants that use cashews instead of cream, cashews are still a no-no from some on paleo, like us.

Our favorite Indian place in San Jose is called Punjab Cafe and prior to paleo (we call it BP) we used to come here for all sorts of yummy curries etc. Our waistlines were however not too happy about it. We haven’t been for a while but my youngest wanted to go there for his birthday dinner – so off we went and scoured the menu for something more paleo than a cream filled curry sauce.

So Kitty ordered Tandoori Chicken – doesn’t it look good? While the pic above is not Paleo, we scoured the web for a paleo version and will be cooking it this weekend. Since we don’t have a Tandoori oven, your own oven should do just fine.

Trim off any excess fat from the chicken. Season the chicken parts evenly with kosher salt. In a bowl combine yogurt, tandoori seasoning and lemon juice and mix well. Spoon marinade over  chicken and work it in with your hands. Cover the chicken with plastic wrap and marinate in the fridge for 4 to 8 hours

Arrange chicken on the rack skin-side down and pop the tray in the oven for about 40 minutes. Flip the pieces skin-side up at the halfway mark.

The chicken’s done when the juices run clear when stabbed with a fork.

Our paleo meal last night – Kitty and I had the dogs without bun on a plate but we put the kids in regular buns (actually I meant – the kids dogs… 🙂 ). I personally like mustard, mayo, dill relish (no sugar), dill pickles (my fav is Strubs but you can’t get those here so we have to make do with Bubbies – which I have a feeling are made by Strubs in Canada anyways) and sauerkraut as toppings –

Heat oven to 400°F. Line cookie sheet with parchment paper. Wrap bacon tightly around hot dogs; place on cookie sheet.Bake 12 to 15 minutes or until bacon is thoroughly cooked and hot dogs are browned. Serve immediately in buns with your favorite toppings.

Our organic box brought us leeks week after week so we found and adapted this recipe as a nice change from leek soup – although not really Eat To Live friendly, so you can only have a tiny piece, but our kids enjoyed it…

Saute leeks in butter for approximately 15-20 minutes or until soft and translucent. Season with salt and pepper to taste. Remove from heat and allow to cool. Once leek mixture is cool, add egg  and hard grated cheese. Mix to combine. Preheat oven to 400 degrees. Spread leek mixture into tart pan. Bake for approximately 20-25 minutes until crust is golden brown. Allow to cool prior to serving.

Adapted from Super Immunity – we found that the recipe was a little dry so we made a few small changes:

Preheat over to 200 degrees. Put the apple in the blender and puree until chopped, then add all of the rest of the wet ingredients (soaked raisins and Goji berries, almond butter & vanilla) and process until smooth.

Combine the dry ingredients in a large bowl. Pour the wet ingredients into the dry and stir. Using two spoons, form into cookie size patties and place on parchment paper on a cookie sheet. Bake at 200 degrees for 1 1/2 to 2 hours – you are basically dehydrating them – they will not change in size or shape so however you place them is how they will turn out.

Enjoy with coffee or tea

Was in Whole Foods the other day and caught the price of Seitan, which is used as a vegan substitute for meat (yep, its the other, other white, non-meat 😉 )- all the protein with none if the fat – and it was CRAZY expensive. Saw a variant of this recipe in the awesome Vegan on the Cheap: Great Recipes and Simple Strategies that Save You Time and Money

(highly recommended for us vegetarians, vegans to whatever degree) Hell of a lot cheaper – one 2lb bag of Bob’s Red Mill Gluten Flour was only $7

TIP: Don’t just slice and use this directly: slice and pan fry in a little oil to give it some crunch on the outside before you throw it in a stir-fry or whatever. We had some the other day in a variation of this recipe…

Fill a stock pot with the broth ingredients and bring to a boil.

In the mean time, in a large bowl mix together dry ingredients. In a smaller bowl mix together wet ingredients. Pour the wet into the dry and combine with a spoon until most of the moisture has absorbed and partially clumped up with the dry ingredients. Knead by hand for 3 minutes, then let rest for 5. Divide into however many equal pieces you’d like (2-6) with a knife and then knead those pieces in your hand. Don’t work them too hard no matter how much you stretch they’ll probably stretch back, they kind of have a mind of their own.

Once the broth has boiled, lower the heat to a simmer. Add the gluten pieces. Let simmer for an hour. Once done, take them off the heat and let them sit in the broth until cool.

Will keep a few days wrapped in the fridge or weeks in the freezer, if tightly wrapped.

I first discovered this Cole Slaw at Houston’s restaurant up in San Francisco a few years ago when I used to work across the street from it – sometimes I’d just order the slaw for lunch! Of course when I wasn’t dieting it was just a side for a giant rack of ribs – ah those were the days!

Whisk together mayonnaise, vinegar, sugar and salt in medium bowl. Combine cabbage, parsley, green onion and bell pepper in a large bowl. Pour the dressing over the cabbage and mix well. Add celery seed and mix, then cover the bowl and chill for at least 4 hours.

Kitty’s mom used to, like all Asian moms, whip up dinner every now and then from the random contents of the crisper, so that’s what she did the other night and everyone loved it – even the meat lovers of the group – surprising and pretty damn healthy and low fat.

Brown the crap out of the tofu in the pan with the olive oil. Make sure that you don’t burn it – charred tofu is gross, you just want to put a bit of a surface on it – it should be golden brown. Throw in the remaining vegetables except for the bean sprouts, Mirin and soy sauce and simmer until softened, about 10 minutes. Add bean sprouts on top, and simmer for 3 more minutes. Toss everything together and serve.

Here’s a big issue when you are dieting: you want to snack but almost every packaged snack is bad for you, or if its not bad its really expensive (have you seen the price of Kale chips?) so here is a simple snack, fortified with homemade Kale chips.

Put the kale in the oven until crispy. Pop the popcorn. Toss it all together and dust with the salt, pepper and yeast to taste, then enjoy. Much. much better for you than that bag o’ Lays. Yes, even the Baked Lays.

This is a great recipe for almost any leftover vegetables – we do this on the leftover veggies from the previous weeks organic veg delivery if we haven’t used them yet, so the combination should be “whatever you have” – this recipe is also super healthy and nutrient rich.

Preheat your oven to 400. Take all of your vegetables and cut them into 1 inch chunks and put them in a large bowl. Drizzle some olive oil over them and toss. Pile them onto a baking sheet, season with salt and pepper and put them in the oven for 20-40 minutes until they are well roasted. Take out of the oven and let cool. Spoon some of the veges into a high powered blender, add some stock and fire it up – add more or less stock to taste and consistency. Once blended pour back into another pan and keep going until its all blended, then mix it back together in the other pot. It should keep up to a week in the fridge and freeze just fine.
Last time we did this we used some left Pho stock from a Vietnamese place down the street – yum good, but you can use any stock that you happen to have 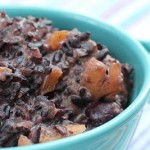 adapted from a recipe from Super Immunity by Dr. Joel Fuhrman

This recipe can easily be doubled, quadrupled etc – just don’t make TOO much because I learned the hard way that it does not freeze well. I use Almond Milk and in the frozen batch all of the milk got watery, so only make enough which will store in the fridge for a week. I eat this every morning for breakfast and go through about a quad of this recipe in two weeks.

2 cups cooked black (Forbidden) rice – use a rice cooker  and the same instructions as for Sushi rice – typically 1.5 cups of rice to 2.5 cups of water is perfect, or cook it on the stove. Rice must be cooked first…
2 cups unsweetened almond or soy milk – I use vanilla Almond Milk from Whole Foods myself
1/2 cup dried apple, soaked to re-hydrate, then chopped fine. You can substitute other dried fruit if you like…
1 cup frozen blueberries – either wild or regular
2 large or 4 small dates, pitted and finely chopped
1 Tbsp currants – I used raisins in a pinch last time
2 tsp ground cinnamon
2 tsp vanilla extract – add more to taste – use a good quality one
1 Tbsp Chia seeds

Place all ingredients, except chia seed, in a medium-sided pot. Bring to a boil over medium-high heat then reduce heat and simmer on low for 20 minutes. Turn off the heat, add the chia seed, stir well, cover and let stand for 5 minutes.

Let cool and eat any way you like: I usually have it for breakfast heated with a little extra almond milk, almost like oatmeal, but its great anytime for a snack, dessert whatever. My family jokes around and calls it “sludge” but I like it. If its not sweet enough for you throw a few drops of light agave nectar on it and stir it in just before you eat it – yum.