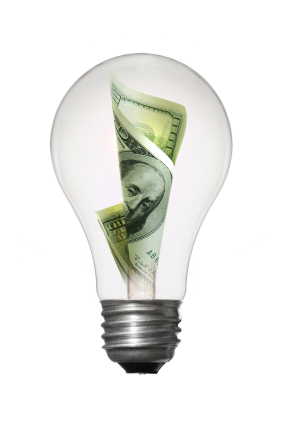 Electric bills are a part of life, whether we want them to be or not. Luckily, we don’t have to feel the burn of a huge bill each month.Here are some tips and tricks to help avoid the jolt of a sky-high bill.Switch bulbs. You can easily change regular lights to fluorescents. These bulbs may cost a little more initially, but over the course of a year they will be much more budget-friendly.Keep empty rooms dark. Double-check to make sure all lights are turned off when not in use. Always get into the habit of turning lights off when you leave a room or leave the house. If you tend to forget, you may want to consider setting lights on an automated timer.

After reading a post on one of our favorite blogs Zen Habits on how to make it impossible to fail, we were looking for a new electric toothbrush for myself at Target.  There was a baby blue Oral-B Professional 1000 on sale for $48, but there was also a pink one (my favorite, of course) there at full price. Only the blue one was on sale, the pink one was $65, but other than they were exactly the same toothbrush.

So we decided to take them both to the checkout and asked if we could have the pink one at the same price as the reduced blue one.  The cashier called someone over. They looked at it. They called someone else over. They looked at them. No one could find a difference between them other than the color, but they scanned at different prices. They hummed and hawed and one of them said but the pink one was the newest one.  We basically just stood there and let them talk amongst themselves (this is one of those situations where it actually helps your case to just stand there and wait for them to make a decision) and after a few minutes of deliberation they agreed that we could have the one we wanted for the same price.

I’m not sure why people don’t just ask. Sure, there is a chance that they would have said no, ans we would have happily paid the full price – but if we didn’t ask, we never would have known.

As they say, if you don’t ask you don’t get. Next time, just ask!

Now I  can tell you that Kitty and I are not very experienced when it comes to investing, but we leverage a lot of good expertise which is out there. One of the most interesting pieces of advice we recently got – after asking our new financial advisor to recommend something to invest in was: what products and services do YOU buy? What companies do you frequent? If you use these products and services, and you think that there are plenty of people out there who use them as well, wouldn’t that be a good value stock to buy?

For example, lets say you hit Starbucks every day. While inside Starbucks, you note that its busy, and getting busier. Over time, don’t you think that might be a good stock to own? It seems obvious, but a lot of times people buy stock with the expectation to hit a huge jackpot. That is extremely unlikely – you may as well buy a lottery ticket!

Basically, the guy is just making sense. As long as you aren’t in it for a quick buck, which in this market is practically impossible, I figure that its not bad advice. Sure you might not see a huge jump in the stock price, but over time it will likely show good value. So here’s the money tip of the day, if you buy their stuff, then maybe the stock is worth a look. Just saying…